Underwater Photographers, get your cameras out!

Calling all underwater photographers! It is with great excitement that CITA is once again hosting the Underwater Photography Competition in conjunction with the 9th Annual International Underwater Film Festival . The photography competition will be open to anyone—professional or amateur, local or visitor—who wishes to submit photos to be considered in the contest (photos must be taken in the Cayman Islands).

The contest will be open July 15th and last through October 25th. The esteemed Cathy Church, along with photographers Ellen Cuylaerts and Patrick Weir, will review all entries and determine the winners based on the judging criteria. A full list of rules and regulations can be found on the official entry form below. Photos can be submitted directly through this on-line registration form.

Winners will be announced at the Underwater Film Festival on Wednesday, November 13, 2013 (location TBA). Prizes will be awarded to the 1st, 2nd and 3rd place photos in each of the following five categories:

Prizes are as follows:

Winning photographs will be on display at the International Underwater Film Festival.

In addition, a ‘Best in Show’ award will be given to one of the first place photos as an overall best of the best! This grand prize winner will receive a trip on the Aggressor Fleet to a location of their choice (Cayman, Belize, Turks & Caicos or the Carib Dancer in the Bahamas).  Prize valued at US $2,795 and includes deluxe accommodation, diving, air, weights, weight belts, all meals and snacks, non alcoholic beverages, local beer and wine.

The International Underwater Film Festival is in its 9th year and is an event that coincides with the International Scuba Diving Hall of Fame (ISDHF). The film festival is an evening where we show a variety of underwater films new and old, artistic and scientific. Some of the ISDHF inductees are invited to show a film, which is especially unique for guests as these ‘celebrity’ scuba divers are able to both introduce and answer questions about their film. This year, Divers Alert Network (DAN) is the presenting sponsor for the event and CITA looks forward to working with them on making the Film Festival another wonderful, educational event for the 300 attendees. Proceeds from the Underwater Film Festival go to support CITA's marine conservation efforts, including the Dive 365 project. 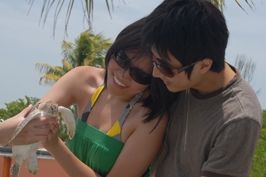 The Cayman Turtle Farm: Island Wildlife EncounterÂ  - where the culture and heritage of the Cayman Islands comes to life.

Grand Cayman's number one dolphin park has an amazing outlook, friendly faces and beautiful animals that will leave you wanting more.

This is your once in a lifetime opportunity to swim and play safely with these wonderful creatures.

The mission of the Tourism Attraction Board is to enhance and diversify Cayman's tourism product by offering high quality tourist attractions.

Cayman Islands are one of the top scuba diving destinations in world, and with Atlantis Submarines, you don't have to be a scuba diver to experience the underwater.